The town house in Aberdeen is an iconic building, built in 1868-74 and remodelled by Thomas Watson from the original Toll Booth 1615-29.

The town house is the home to The Court House, Council Chambers and Tool Booth museum.Our Client John Fulton (Plumbers) Ltd contracted Abscaff to provide full access to the building including the façade, chimneys and tower which stands an impressive 180ft tall.

The project duration was in excess of 26 months from 1st build to final dismantle. The project was a technically led challenging mainly due to the location and the added complication of the restrictions placed by the Court.

Due to the design criteria forbidding any load being placed on the roof a cantilever beam arrangement was constructed which employed 6 tonnes of Kentledge allowing us to scaffold the tower while minimising the loading to the roofs.

Abscaff utilised the Haki Universal scaffolding system which allowed the erection and dismantle of the scaffolding to be done while reducing noise pollution down to an acceptable level.

We employed over 200 tonnes of scaffolding equipment and at the peak 15 operatives were involved in the project. 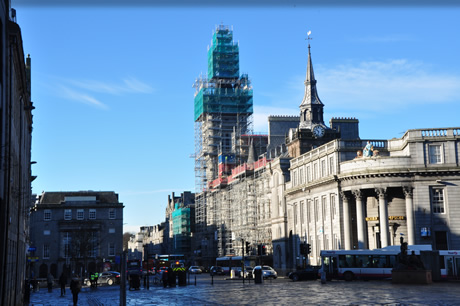 Get in Touch with Abscaff

Abscaff are leading suppliers of Scaffolding Supplies and Equipment from our base in Aberdeen throughout Scotland. To find out how Abscaff can help with your scaffolding requirements please call us today.